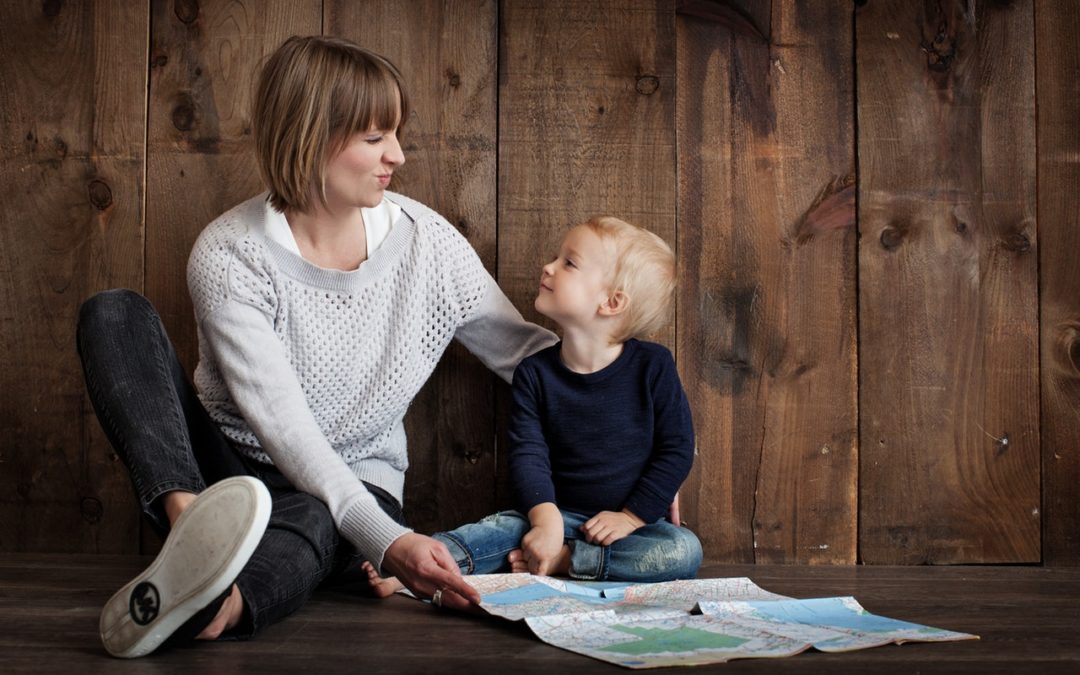 According to the US Census Bureau, out of about 12 million single-parent families in 2016, more than 80% were headed by single mothers. As more people embrace a non-traditional family, the odds of you meeting a woman with a kid continuously increase, especially as you get into your 30s and 40s.

Over the years, I’ve dated a few women who had children (technically, I’m dating one now as my wife just gave birth to my daughter!), and, while it can be a great experience, it’s a whole different bag than dating a childless woman. To help you make the fewest blunders possible, let me give you a few tips:

1. Accept That You Will Never Be First

She has someone who depends solely on her. The baby grew in her, she birthed it, she fed it, and she nurtured it every step of the way. You’re a dude she just met. Which one do you think she’s going to choose if she has to? This isn’t to say that you’ll be pushed to the side, but your ego has to be strong enough to be able to share her attention.

In her eyes, you will never come in first place — her child always will. But that’s how it’s supposed to be, and it’s OK.

Don’t ever put her in a position where it’s “me or the kid.” Even one of my fellow female dating coaches started dating a guy with a kid and then complained to me that the kid always got precedence over her. Ugh, don’t be that person!

2. Be Cool With Last-Minute Changes to Plans

Nothing will be set in stone again. Ever. Whether the kid is a baby or a teen, last-minute things will always pop up. Day at the park? Nope, baby just got sick. Reservations at 9? Kid just coated themselves (and the walls) with Mommy’s makeup. Night on the town? Her high-schooler just got caught sneaking out of the house.

Try to leave your plans open-ended so you won’t be as disappointed and she won’t feel as bad if she has to change them or cancel.

You were a kid — you know what you got up to! Having a child is like navigating portions of calm in between storms of activity. And just like Sam Jackson says in “Pulp Fiction,” “Be cool!” Don’t make a big deal out of it. Believe me, she’s probably been looking forward to this date all week and has done everything she could to set herself up for success, but the best laid plans of mice and men.

It’s better sometimes to have more open-ended plans where timing isn’t as necessary. How you deal with these interruptions will endear you more to her than even the date may have!

3. Don’t Rush Into Meeting the Kid

Maybe you met her out with the kid, or maybe you only know the kid through social media pictures. Either way, just because you started dating her does not mean you automatically get the right to meet and get to know her child. Being a kid, especially to a single mother, is always a confusing time, and it’s the job of the mother to ease everyone into it. It can be devastating for children to meet and get to know people who enter their mother’s life and then leave with no real explanation.

She doesn’t know where things are going with you, so let her introduce you to her child on her time. Refrain from pushing her to make those kind of moves when she’s not ready.

Don’t push her to introduce you two. She will know when the right time is. She wants to make sure you’re going to be around for at least the immediate long run before bringing you into her child’s life. At the same time, if you’ve been dating for months, are serious, and still haven’t met the kid, you can bring it up by saying you would like to. But never push it, or you could end up pushing your girlfriend away.

4. Consider the Child When Arranging Dates

She has a 2-year-old little girl who she’s nuts about. If you suggest going to Coachella for the weekend, either with or without her daughter, it’s not really going to fly.

It’ll mean a lot to her if you plan dates that start and end early so she doesn’t have to worry about missing bedtimes or anything else important.

Instead, say to her “So I was thinking about what to do this weekend, and what about after you feed Katy her breakfast and the sitter comes over, we go to the State Fair for the day? We could go on some rides, take pictures of the animals to show Katy later, eat a lot, and play some games. That way, I can win you and her some prizes to take back, and we should be able to get you back for her bedtime.”

The fact that not only did you do some thinking and planning, but you also made sure her daughter was front and center to those plans will go a long way in proving what a great man you are.

5. Understand That She’ll Know More About “Bubble Guppies” Than “Game of Thrones”

Even for single adults, there’s just too much good TV on now to be able to be keep up with everything. There are only so many hours in the day, and, if you have a child, those TV-watching hours are going to be filled with “Paw Patrol,” “Bubble Guppies,” “Monster High,” or many other shows that you have never heard of.

She probably doesn’t have time for watching hours of adult TV (she’s usually busy watching kid shows), so try not to give her a hard time about missing the latest “Game of Thrones.”

Not only is she not going to subject her little one(s) to the Mountain squishing Oberon’s skull with his bare hands, but any show that’s on at 9 p.m. may as well be at midnight for a single mother.

After playing, washing, feeding, getting into bed, cleaning up the kitchen, getting her back into bed (seriously, why is it so hard to make someone sleepy go to sleep), reading her a story, singing a song, and taking a shower before her own bedtime, the last thing she wants to do is stay up late watching something about a child being murdered, even if Joffrey was a sadistic dick.

6. She May Have Trust Issues, So Go Slow

If she’s a single mother, there’s a big chance that this is not how she envisioned her life to be. Maybe the father walked out, maybe they got a divorce, or maybe she’s a widow. In any event, she put her full trust in someone for one of the most important events in her life, and that trust was broken, even if it was fate that robbed her of her husband.

Divorce, death, whatever — you don’t know what her situation is, so take things at her pace and let her open up to you when she’s ready.

There are two parts to this. The first part is you need to be gentle and take it slow. She can’t ever just jump in with both feet without thinking anymore. Just be there for her. The second part is you must be trustworthy. All of us think we’re trustworthy, but you’ve got to take it to the nth degree. Things that might get overlooked or brushed off easily in other relationships (like being late, running into an ex you didn’t disclose, or some weird texts on your phone) could be much bigger minefields now. While it may or may not be rational, you need to make sure she knows your word is bond and can rely on you.

7. Know That She Isn’t Necessarily Looking for a Father for Her Kid

Many guys (or rather the friends of many guys) may say this is the biggest “trap” to watch out for. “Dude, she’s just looking for a father for her son so she doesn’t have to work as hard!” This is a really low statement. Yes, perhaps further down the line, maybe you would be a good father to her son. But that’s not what she’s looking for at the moment.

Don’t assume anything. Who knows — she could be looking for a friend or a fling, or maybe she likes you but wants to feel you and the relationship out first.

Maybe she and the father have an amicable relationship and co-parent and she will never be looking for another father. It could be that she just likes spending time with you and will see where it will goes. And, believe it or not, she could just be entering a more independent phase of motherhood where she can leave the baby with a sitter and is looking to have some personal time with a hot guy. She might just even be using you as she’s not had a sexual experience since before the baby was born. Whatever it is, don’t rush to judgement.

8. Realize That She’s a Woman & Sexual Being Like Anyone Else

There’s a complex called the Virgin/Whore Dichotomy that can affect guys. In its simplest form, it means men only see women as saints or prostitutes, and there is no in-between. So a man will see a mother, and he’ll think she only wants tender touches, vanilla sex, and has a low sex drive. While it may be true of individual women, thinking they’re all that way because they’re mothers is a fallacy.

Just because she’s a mom doesn’t mean she wants vanilla sex. Get to know her before making judgments about her sexual preferences.

A final point to this is she may just want a friend with benefits. You may not be dating or father material, but she may not want either of those things at the moment. She may just want you for your body. For heaven’s sake, help the poor mother out!

Be Considerate & Listen — You’ll Do Fine!

Dating a mother will be more complex and complicated than some other relationships you’ve had, but it can also be more rewarding and have the potential for amazingness. You just have to approach it in a different manner. For many of my readers who are in their 30s or 40s, this idea can actually be more attractive than the thought of starting from scratch, going through pregnancies, diapers, screaming, and sleepless nights. Just don’t make assumptions and tread slowly and carefully.

Hunt Ethridge is Chief Marketing Officer of LiveDatingAdvice.com, co-founder and senior partner at International Dating Coach Association (IDCA), and the senior coach at New York Dating Coach. You can follow him on Twitter (@huntforadvice )as well as his website www.HuntForAdvice.com.

At MatchVIP, it’s all about helping career-minded South Africans form long-term, rewarding relationships through a hands-on approach to matchmaking. The aim of the agency’s CEO, Shannon Davidoff, and her team is to be their clients’ best friends, take the stress out of the dating process, and make it the fun experience it should be.